An Introduction To Bradworthy Primary Academy

Our School was founded in 1872 by Mr Lancaster Lucas and Rev. Clyde and until 1900, when it became known as Bradworthy Council School, it was known as St. John's School.

Over 100 years later in March 2011 we became Bradworthy Primary Academy, which meant that we were no longer under the control of Devon County Council, and better placed to served the specific needs of both the children in our care and the needs of the local community as a whole.

Older children were taught by Mr Edward Preece who worked as "School Manager" for 20 years, and as an employee of the school for 39 years.

From 1903 the wider business of running the school (such as ordering fuel and textbooks, and organising teachers salaries) fell to School Managers, the first of which being John Seldon who was the schools first Chairman.

During this period the children were in the care of teachers such as Jane Jennings, Miss Roberts, Ada Mathews and Miss Emily Chubb.

The school had 82 pupils on roll at this point, however this declined to only 66 children in the 1940's before 28 evacuees arrived during the Second World War.

This was a time of change with "wireless lessons" beginning, the first use of film shows from the Ministry of Information, the introduction of selective tests so that children could go to Grammer School and the first ever Open Day when parents were invited into school for the fist time.

In 1948 the school field was purchased and generally considered to be Mrs Worthy's greatest contribution.

In 1956 the fist school kitchens opened, with Mrs Ham becoming the school's first ever cook.

During the 1960's the school developed further with the introduction of two "Houses" (Herons and Magpies) so that the children could compete against each other in the school's first Sports Day. 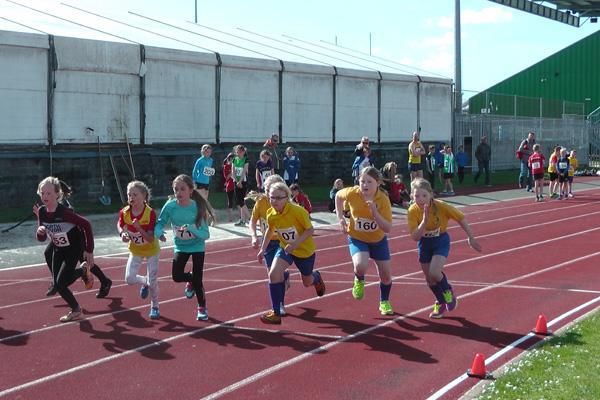 A swimming pool was built and a new classroom for younger children erected.

The first school uniform was introduced in 1964 with "school colours" established as royal blue and yellow.

By 1975 the school roll had risen to 94 children and the school appointed its first Deputy.

Bradworthy School's first PTA was formed in 1981 and continues to do exceptional work in support of the school and our children to this day.

In 1983 original school was converted into a hall equipped with gymnasium apparatus for Physical Education plus stage blocks and lights for drama. A new teaching block was built on the site of the former playground and linked to the original building. Four new classrooms were built with under-floor central heating, linking doors and for the first time indoor toilets.

Mr Richard Stephenson took over as Headteacher in January 1998, on the retirement of Vivian Gale after a record 21 years as Headteacher, and at this point there were 88 children on the school roll.

This was at a point where the new "National Curriculum" and Standard Assessment Tests (SATs) for seven and eleven year old children were still relatively new developments and the cause of much "angst" in schools across Britain.

At the earliest stage we set about creating an environment where high levels of achievement were created, not through academic "hot housing" but through the development of an extended curriculum, and access for all children to music, drama, sport and art so that creativity was placed firmly at the centre of our work.

We entered a phase where our school roll rose drastically to 145 children when we converted to academy status in 2011 and to a record 203 children at the time of writing, in Spring 2020.

In September 2002 the school benefited from a building project in response to this increasing school roll, which required the setting up of an extra class. The project has allowed us to construct a purpose built area for our younger children which included a large new classroom with an adjacent covered outdoor play area which is accessible by children in our Foundation Class. We were also able to provide our younger children with their own toilet and cloakroom areas away from the rest of the school.

Over a period of ten years our school grew from the four classes we had in 1998 to seven classes, which allow us to teach our children in single Year Groups.

Whilst this was a huge step forward in terms of educating our children it provided huge challenges in terms of the space required to educate these children effectively - challenges which persist to this day.

The ever increasing school roll enabled us to obtain a grant in 2011 so that we could convert the school hall to a permanent class base, to install a mezzanine area, which we use as an additional computer suite and for group work, and to build a new classroom to the rear of the school.

For the first time we had seven properly equipped class bases and this was a huge step forward. 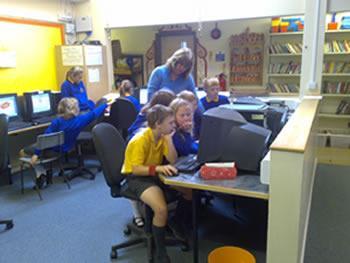 Over a period of years this has grown from strength-to-strength.

We have developed our facilities, and increased staff levels, and with Janet Petherick as kitchen manager we have reached a point, in 2020, where we are averaging over 130 meals a day - with a record 250 meals being served for Christmas Dinner in 2019. 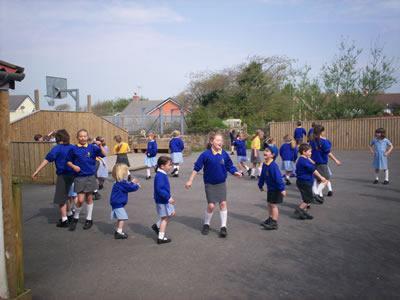 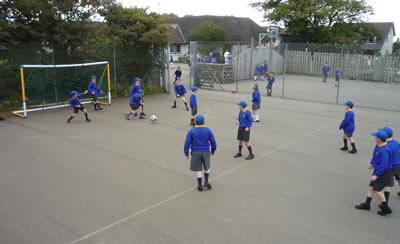 We have plenty of outside space, with three playground areas (one of which being fenced and suitable for a range of ball games) and a very large sports field.

In addition to their use during breaks (even in the depths of winter !) and for other school activities like "Red Nose Day" they allow us to provide a very full range of sporting activities and clubs and provide the village with the only recreational space for children to play in.

In response to local need we began to operate a free out-of-hours child care service in 2009, making it possible to drop children off at 8.00am each morning and pick them up as late as 5.30pm each evening.
This service is designed to compliment the extensive range of after-school clubs that we offer each term and provides a vital service to our isolated rural community. 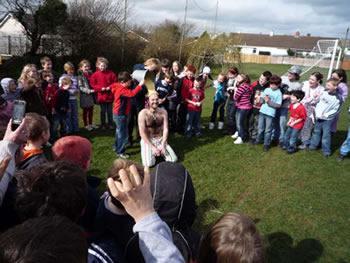 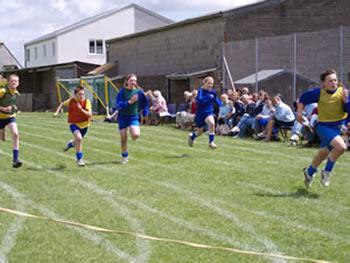 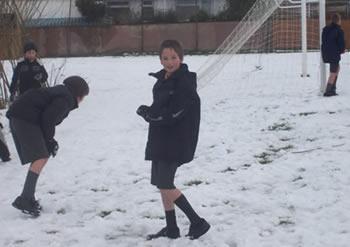 Having converted to academy status in 2011, and with Barry Radford firmly established as our Chair of Governors, we continued to drive forward our plans to develop our facilities so that they properly serve the needs of the children enrolled on our growing roll.
Since conversion to academy status we have been able to raise around £500,000 in grant funding and this enabled us to realise the second phase of our development plan with the opening of a large school sports hall (225 square meters) and the provision of a much needed dedicated teaching block for the pre-school which operates on our school site. 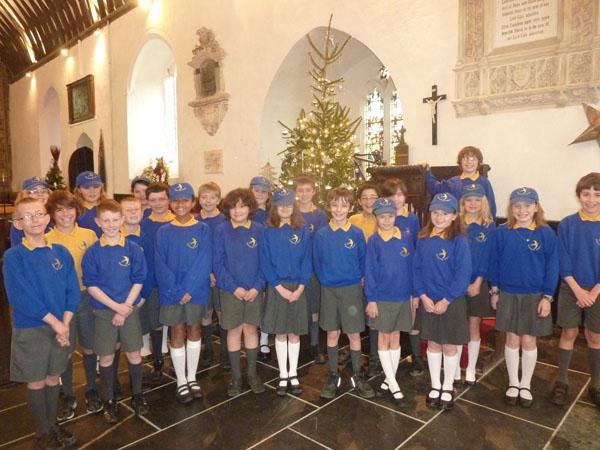 We believe that we have reached a point Bradworthy Primary Academy offers excellent facilities for your child’s development. We are proud of our school and encourage our parents, pupils and governors to take an active interest in the school to enable us all to constantly improve the quality of education we give to each child.

We constantly aim to encourage pupils to develop to their full potential in a structured, secure and happy setting, thus laying foundations for maturation into responsive and enquiring scholars who are independent, responsible, polite and thoughtful.

Over the last twenty years our children's academic performance has always been above national averages and in addition to this we are incredibly proud of the huge range of additional activities and experiences that they benefit from each year because this is a huge part in their development as rounded people - however we are not content to "sit on our laurels".

The closure of two local schools, our growing roll and our determination to offer our children the very best experience possible means that in 2020 we are at a point where our school is technically full (although we are still committed to admitting children whose parents feel Bradworthy is the best place for them) and this means that we have a range of challenges ahead of us in the coming years. 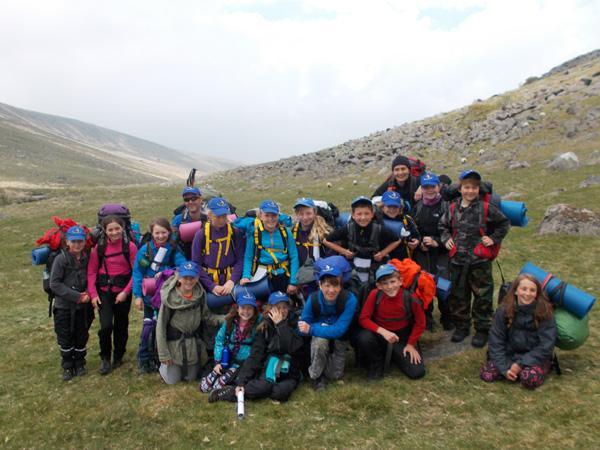 The basic issue is that in our school year 2019/20 we do not have sufficient space to meet even the basic curriculum needs of the children at our school - we are overcrowded !

We have been tying to obtain funding to develop better facilities for several years and we have been unsuccessful.

We know that everyone agrees with the need to provide proper facilities for the children to work in, and understands what an absolute disgrace it is that the “powers that be” have such little interest in our situation.

It is an appalling state of affairs where our requests for such relatively small amounts of money (about £70, 000) are ignored while billions of pounds are squandered and wasted across the country every year.

We are increasingly subjected to endless, pointless bureaucracy and over management, which achieves nothing, and which everyone seems perfectly happy to fund, whilst at the same time simple practical projects, like providing enough space for children to work in, are deemed unaffordable and unimportant.

We have decided to take matters into our own hands and to attempt to raise the £180,000 needed ourselves.

We believe that with the support of local people and businesses we will be able to take control of our own affairs and look after ourselves, as Bradworthy School has always done throughout its long history.

As we write in Spring 2020 we have already raised £100,000 and we are committed to going the rest of the way so that we can build on all of the great things we've achieved over the years and take ourselves to the next level !

Unfortunately not the ones with chocolate chips.

Some cookies are necessary in order to make this website function correctly. These are set by default and whilst you can block or delete them by changing your browser settings, some functionality such as being able to log in to the website will not work if you do this. The necessary cookies set on this website are as follows:

Cookies that are not necessary to make the website work, but which enable additional functionality, can also be set. By default these cookies are disabled, but you can choose to enable them below: